Unless you’re new to the health and fitness world, chances are you’ve at least heard of BCAA’s.  But for most people, that’s about where their knowledge of the supplement ends.  For the rest of us, let’s take a closer look at BCAAs. 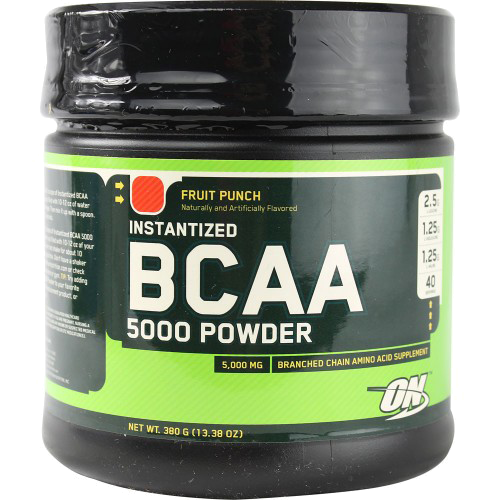 BCAA stands for branch chain amino acids, but unless you’re a biology major that probably doesn’t help all that much.  So let’s try to take a closer look without needed a translator –

Basically, amino acids are the fundamental building blocks of your body.  These chemicals are literally the “ingredients” of humans.  The sequence of these amino acids found in your body makes up your DNA code, making you completely unique to any other human on the planet.

Of these amino acids, there are nine that are not produced by the body and must be taken in through nutrition.  These are called the essential amino acids.  Essential because you need them to live.  These 9 are necessary for many bodily functions.

Of the nine amino acids, the big three are leucine, isoleucine, and valine, which are known as branch chain amino acids due to their molecular structure.  So these 3 are the BCAAs that you hear so much about.

But why are these three so special?  Well, they account for 35% of all amino acids found in muscle protein.  In other words, they help build muscle, speed up recovery time, and play a major role in metabolism, not to mention boosting the immune system and brain function.   So now you can get a better idea of why BCAAs are so popular within the fitness industry.  A lack of these due to poor diet would seriously hamper an athlete’s performance, if not their overall general health.

BCAAs are primarily responsible for triggering protein synthesis, which is science speak for “it will turn your food into muscle”.

And this is essentially what all the fuss is about.  Building muscle is the primary goal of all gym-goers, even for those looking to lose weight (See below).

So when combined with resistance training, the body responds by increasing protein synthesis allowing for full muscle growth potential.

Furthermore, it’s suggested that branch chain amino acids are burned during the exercise itself, which makes having a sufficient supply in the body critical for optimal performance.

For endurance athlete, this becomes even more important, as the muscles will actually begin to break down once all amino acids have been depleted.  This is a major reason why most endurance athletes are much skinnier compared with other athletes. They just can’t keep enough amino acids in their system for that long to preserve large amounts of muscle (Although in some endurance sports such as marathon running, this is an advantage, as running 42 km with a 100+ kg frame is going to wreak havoc on your joints).

So in other words, having a surplus of BCAAs within your body will not only promote new muscle tissue but also protect and preserve the muscle you already have, even in the absence of exercise. 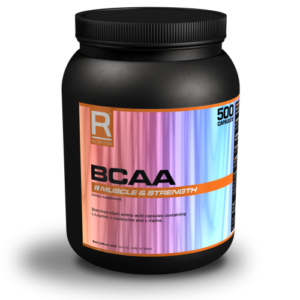 From running a marathon to chewing gum, anytime your body is moving in some way, you will be actively burning calories.

So movement causes you to burn calories but what causes movement?

Our muscles pull our skeleton around and keep it in place.  Without muscles, we would just collapse down onto the floor like a big sack of jelly.

So because muscles are responsible for movement and movement is the most effective way to burn calories, think of your muscles as calorie-burning factories.

And the bigger your factories are, the more calories they will burn.  This is why bigger guys tend to eat more.

Just to maintain that much muscle mass they need a certain amount of calories in their system, and if they don’t have them, the muscle will essentially begin to cannibalize itself, getting rid of the muscle in a sort of throw-everything-overboard style of survival.

So even without the movement, just sitting on the couch, a person with a higher muscle mass will burn more calories than someone with lower muscle mass, meaning, all other things being equal, the meathead will have an easier time losing fat.

And since BCAAs aid in building muscles, then, by that same token, they also aid in fat loss.

But to get more scientific, research hints that BCAAs in of themselves might aid in fat loss, especially leucine.  It seems as though leucine improves glucose tolerance and increases energy expenditure and fat oxidation.

So while the jury is still out, the research looks like BCAAs have some obesity-fighting characteristics.

During bouts of intense exercise, your body will burn off glycogen stores first.  However, after those are depleted, it turns to BCAAs as a secondary source of energy.  So by having an abundance, you’ll be able to perform better at a high level for a longer period of time compared to if you were low on BCAAs.

Also as mention earlier, research has hinted that BCAAs have fat burning properties themselves, and this access to fat, which your body sees as energy, will improve your endurance.

Other research has suggested that BCAAs limit the uptake of tryptophan, which converts to serotonin, and basically tells your brain that you’ve had enough and you should take a rest.

By limiting these signals you’re more likely to continue for a longer duration.

Studies have shown that BCAAs have proved effective in reducing muscle soreness than the control group.

In two separate studies, one on women and a separate study on men, the group that used BCAA supplementation reported a significant reduction in muscle soreness and less of a drop in strength 48 hours after an intense workout.

This reduction in delayed onset muscle soreness would allow an athlete to bounce back quicker and more frequently after high-intensity training sessions.  Over the long run, the ability to train more often would prove highly advantageous.

Another study with rats involving branch chain amino acids showed that BCAAs extended the rodent’s lifespan in much the same way as calorie restricted diets did.  At the same time the health of the heart also improved over the control group.

This lead to older rats with a higher overall bill of health.  And there seems to be no reason why this wouldn’t carry over to humans.

It seems as though BCAA will keep you younger and healthier for longer.  But what’s more, is because of the effect BCAAs have on neurotransmitters in the brain, cognitive function also improves.  This allows you to think better and more clearly.

On the flip side, a decrease in cognitive function due to malnutrition is well documented in both children and adults.  This proves that a well-balanced diet is not only important for physical health but also plays a major role in mental health.

How Does It All Work?

During bouts of intense exercise, the body enters into a catabolic state.  The opposite of this is an anabolic state when the body, which you may have heard used in the term “anabolic steroids”, it means the body is in a state of muscle building.

Catabolic on the other hand is a state when the body is essentially breaking down tissue.  The body will prefer to break down fat first, but only to a certain point before it starts to break down the muscles.

When the body is in an anabolic state and looking to build more muscles, protein synthesis, or converting food to muscle, is ramped up.  During a catabolic rate, the existing protein found in the muscles gets broken down and used as energy.

This is why sometimes you will hear people tell you that you actually get stronger on your days off.  It’s during this rest time that your muscles will repair themselves, boosting protein synthesis in order to create more muscle tissue, in turn making you stronger.  In order for this to happen, an athlete needs adequate rest, recovery, and nutrition.

As we already discussed, BCAAs boost protein synthesis.  And since protein synthesis creates new muscle, not having a sufficient supply circulating inside your body will mean that your muscles will be starved of the ingredients necessary to grow, pushing your body into a catabolic state by default.

Where Can I Find BCAA and How Much Do I Need? 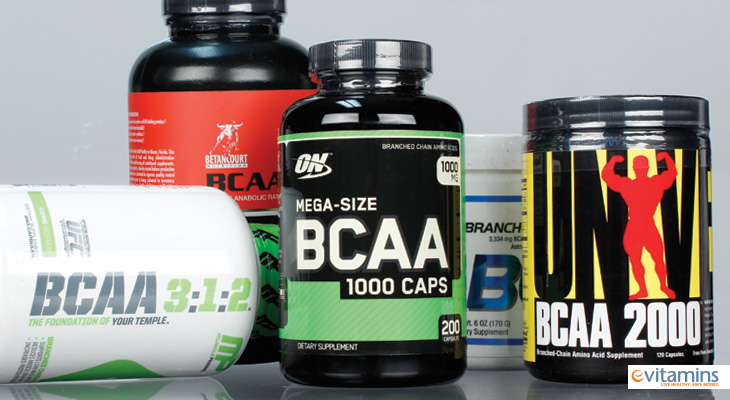 Other than that, there are countless supplements on the market that solely offer BCAAs. A quick search on Google will yield an almost endless amount of choices.  Although the prices and the claims vary from company to company, because BCAAs are such a basic compound, they’re all going to be pretty much the same.  There’s just not that much variation that you can get at such a root level.

As for dosage, there should be an instruction label on the bottle. Generally, 5-10 grams before and after workouts is the norm.  If you are a bigger guy or you train like a madman, then you’ll need to up the dosage.

BCAAs’ importance for overall health and performance is not even questionable.  They are so important for so many vital bodily functions. Prolonged periods of insufficient quantities will have a serious impact on your health.

So are branch chain amino acids worth it?  There’s no question.  It’s unequivocally a “yes”.

But is it necessary to use BCAA supplements?  Now, that’s a question that needs a little more thought.

If you’re a high-level athlete whose livelihood is derived from sports performance and where success is measured in microseconds, then of course, why wouldn’t you take BCAAs? Every possible advantage, no matter how small, should be taken into account.  The competition is just too close.

But when it comes to everyone else; If you are eating a well-balanced, nutritious diet, and are getting proper recovery time in between workouts then you should have no problem with a deficiency in BCAAs.  That being said; will have a little more by taking a BCAA supplement hurt?  Definitely not.

So if you don’t mind spending the money on the supplements then, by all means, go for it.

However, if you’re just a weekend warrior, or just looking to lose a few pounds, then you probably won’t notice much of an effect from taking a BCAA supplement.  It would really only benefit people who regularly train at high intensity consistently over long periods.

For most people, a solid, wholesome diet will be all that is necessary.  And if you’re using a supplement to help cover-up terrible eating habits then that won’t work either.  Supplements are supposed to be just that, supplementary. They are designed to work alongside a nutritious diet, not replace it.

Science has come a long way over the last half decade and there seems to be a pill for everything.  But nothing has yet beat old fashioned wholesome food.

Glucosamine Supplements – How To Choose The Best One For You