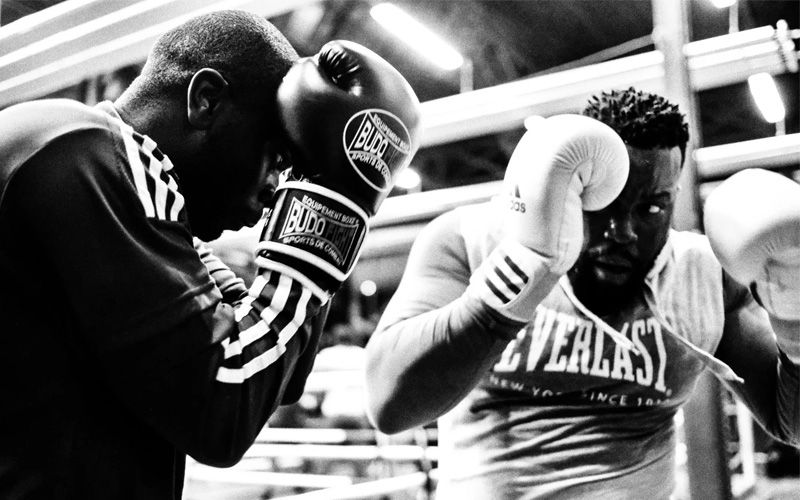 If you’re new to boxing – whether it be training or observing as a fan – it is likely that you have seen professional fighters throwing a whirlwind of punches so quick and so vicious they appear to be arbitrary and random. Of course, we know this is not the case. In fact, professional boxers have spent thousands of hours training and perfecting these boxing combinations; that is, the stringing together of multiple punches. When we observe these boxing combinations by professional fighters they flow elegantly as if they are second nature.

At this point you may be thinking that these combinations are difficult and complex. While yes, they certainly can become complex as they get much longer, they are quite simple and stem from only a hand-full of punches. In what follows we will cover some of the basic boxing combinations that every beginner should learn, practice, and become second nature.

Before getting into boxing combinations it would be wise to first cover boxing stances. Either your left hand is your dominant hand, or it is your right hand.

The difference between these two stances is simple: If you stand orthodox you will stand with your left leg forward. Of course, the concept behind this is that your right hand is now further back and is acting as your power-hand. When throwing a hard cross with your right hand, it will derive energy from your back foot and have much more power.

Conversely, if you stand southpaw you will simply switch your feet and stand with your right leg forward. The same principles apply as before. Your left hand is now acting as your power hand for those big knockout punches.

Despite a professional fighter making his/her whirlwind of punches appear complex and difficult, we can break down nearly every combination into SIX basic punches:

Keep in mind here that the number system is actually very important. As you will hear, or maybe already have heard, coaches and trainers call these numbers out when training.

If your hitting training mitts with your coach and he/she calls out, “1, 2”. They are calling out a jab and then a cross.

It is worthwhile noting that not all numbering systems are the same.

One coach may have a numbering system of 1-6, while another could have 1-12. The coach with 1-12 may have his/her 7-12 be all body-shots instead of head-shots. Another coach may define a “2” as a left-hook instead of a cross.

It all depends on the gym you are at and the coach in charge. HOWEVER, the general rule of thumb and the most common numbering system is the 1-6 listed above. It will work for nearly all beginners and any gym you encounter.

More complex or different numbering systems will often be used by professional fighters and their coaches.

Before diving into stringing these punches together to form combinations, lets first give a brief explanation of each punch.

It is crucial to understand proper technique with each individual punch before trying to string together combinations; especially combinations of more than two or three punches.

The jab is a quick straight punch from your lead hand. It is a multi-purpose punch that is used for both offense and defense. On offense, it’s used to set up a combination of punches. It is also used to close distance and move closer to your opponent. Defensively, it will keep your opponent at a distance, or if they are stringing together several punches it can break that combination.

The Cross refers to a straight punch with your power hand. It is a power-punch that is typically preceded by jabs and hooks to “set-up” an opening for a hard cross.

Assuming you are an orthodox fighter, a right-hook differs from a left-hook in that is coming off your back foot, it is therefore more powerful but much harder to land. A right-hook will typically need to be well-set-up by a combination to create the opportunity.

An uppercut (upper) is a short powerful punch that typically requires you to be in close to your opponent. It is thrown from the 6-o’clock to 12-o’clock position. It can be very unassuming and can catch your opponent’s defense off guard.

Assuming you are standing orthodox, the right upper is going to be the same as the left. The difference is that the right is coming from your power-hand – if landed flush it can be devastating and end any fight.

Now that we’ve covered the proper stances and some brief explanations on the six main punches that comprise nearly all boxing combinations, let’s start off with the basics.

It’s worth noting that as a beginner you want to stick with basic boxing combos. Typically, combinations of only two or three punches. This will help develop the combinations properly as well as fluidity.

The 1, 2 is the first combination any beginning boxer learns at a gym. It’s a classic; it’s simple, it’s easy, and it is very effective.

Whether it’s your first day in a boxing gym or you’re a professional boxer fighting for a world title – the 1, 2 is your bread and butter.

Don’t believe us? Take a look at Mike Tyson using a powerful jab-cross in one of his most devastating knockouts.

It’s a simple combination started with a jab to gauge distance, move closer to your opponent, put him/her on the defense, all the while setting up for the big power cross that shortly follows.

This combination should be trained extensively and perfected. The key is fluidity, the jab should be quick and the cross needs to be thrown immediately after.

Here is a link to a tutorial on proper form for the jab-cross combination.

As mentioned before, the jab is an extremely versatile tool. The double jab, cross is a very effect punch both offensively and defensively.

This combination can be thrown if you are a bit further away from your opponent and throwing just one jab will not get you in close enough. The second jab gives you the opportunity to get in closer while keeping your opponent’s guard up and not allowing him/her to strike back.

If your opponent is hitting you with several combinations and you need to back up quickly, throwing a double jab, cross as your backing away is very effective. This allows you to get out of his striking range while holding him/her off with punches of your own.

When it comes to throwing boxing combinations, it’s all about using your body’s momentum to “load up” for the next shot.

For this combination, when you throw the jab then cross, your body will be in a position that means you will have to come back to the right to get to a center position.

This is where the hook comes in; use that momentum and leverage to throw a left hook.

When you practice this, you should be able to feel a very smooth and natural movement in your momentum and body position. You could imagine throwing a left-jab followed by a left-hook. While this is common, give it a try and feel the difference in your body’s momentum. It’s much smoother and faster to throw a left hook after you have thrown a right cross.

Remember, fluidity is key. Do not throw them as individual punches, but all together.

Here is a video by the legendary boxing coach, Freddie Roach explaining the 1,2,3 combination.

As you throw the hook, your body will come back to its center position which will put you in the correct posture to throw a quick hard cross as a potential fight-ending blow.

When first starting out, keep it simple. Play around and practice with three punch combinations using only 1’s, 2’s and 3’s. Double up some of the punches. For instance, a 2 , 2, 3. Practice going to the body as well. Throw a 2-body, 2-head, and 3.

See what feels comfortable and what may feel awkward when stringing together punches; and remember, technique is the most important aspect when practicing your boxing combinations.

The jab puts you in range and sets up the combination. The right upper should pop your opponent’s head up and out to set it up for the left hook. If the left hook doesn’t put your opponent down, then the cross acts as the finishing blow.

Keep it smooth, crisp and let it flow. This is a great combination to learn. 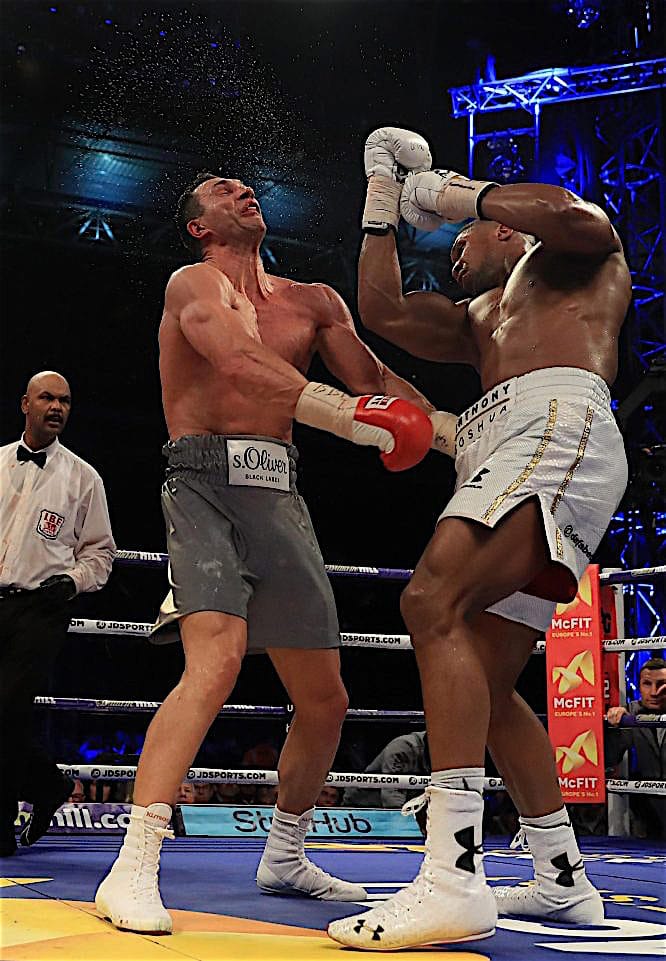 Mixing it up a little more, begin with a quick, sharp double jab then cross. Followed up by a left hook and hard right upper.

You always want to control your body’s momentum. Throw these punches light. If you throw the left hook too hard, you risk over rotating which will put you out of place for the hard right upper.

Shadow boxing is a fantastic way to practice these combinations so that you do not over rotate on any punches. When hitting a heavy bag, it provides you with too much resistance, typically leading to you throwing all your punches as power shots.

As you may be able to tell by now, putting these combinations together is quite simple. They require hundreds of hours of practice, but the concept is simple. Control the momentum of your body and use its leverage to set up the next punch.

In addition, your defense while throwing a large combination is just as important as the technique of the punches.

This explains why longer combinations are more advanced. Not only are you mixing in shots to the body and the head, but when you throw five to eight-punch-combo’s you are not defending yourself. Especially as a beginner, long combo’s will open you up to a hard counter-punch or counter-combo.

As your combinations begin to develop more and more, start introducing shots to the body. Each of the 1, 2, 3, and 4 punches can be to the body as well as the head.

You want to mix these punches into your combinations to get your opponent to drop his/her hands from protecting their head, to protecting their body. Once their hands drop from your punches to the body, you immediately fire a shot to the head.

Perhaps the best example of this is Mike Tyson. One of his signature combinations was a hard hook to the body followed by a hard uppercut on the same side.

Check out this video for some notable examples of the power of Mike Tyson and his ability to get his opponents to curl over, opening their head for a KO blow.
https://www.youtube.com/watch?v=AMydMkEB97k

We covered the two types of boxing stances; either you’re an orthodox fighter or a southpaw. We covered the six main punches and the numbering system that will comprise nearly all your boxing combinations:

And we went over a few basic, intermediate, and advanced punching combinations for you to practice.

To sum it up, make sure you practice and prioritize your technique when learning these combinations. Go slow, but make sure your combinations are fluid. You want them to fire-off seamlessly rather than be mechanical and rigid.

Focus on the position and momentum of your body. You can create your own combinations using any of the six punches listed above. Try them out and see what feels natural to you.

5 Different Punches Every Boxer Should Know

The Kidney Punch, Liver Shot, And Other Vital Organ Attacks

Shadow Boxing – 6 Tips You Should Know Before Your Next Training

How To Build Speed And Stamina Doing Heavy Bag Combos