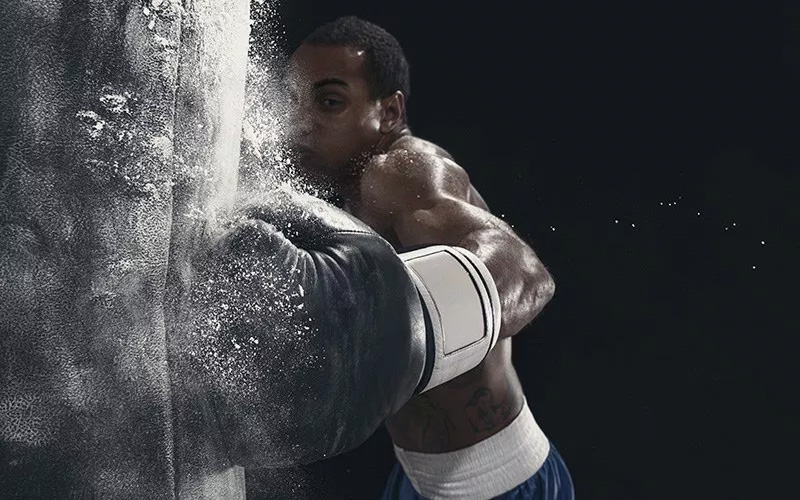 So you want to be the Ultimate Fighter? Well, you’re going to need to master a few basics first, starting with a few heavy bag combos that will help you master the heavy bag and your opponent.
Read on as we break down how to improve your strength and conditioning, and help build you into the ultimate fighting machine! How to Build Speed and Stamina doing Heavy Bag Combos

One punch at a time will do nothing for you, not in the gym and certainly not in the ring. 3-punch combinations are good for beginners, but try to work your way up to 4, 5, and 6 combinations as you build stamina.

Now before we go any further, let’s make sure you are familiar with the punches you will be using in your heavy bag combo drills.

Punches you will be using in your heavy bag combos

There are four basic punches that you will need to be familiar with to get the most out of your heavy bag.

For training purposes, your standard posture should resemble the basic boxing guard (standing perpendicular to your opponent with your hands up close to your head, placing your dominant hand near your chin and non-dominant hand near your eye).
This time-honored stance has long been the dominant stance in combat sports because of the ease in which fighters can move from offense to defense.

What you need to know before you begin

Speed kills, as the old saying goes. It’s no surprise that some of the greatest fighters of all time also possessed blistering speed. Muhammad Ali, Sugar Ray Leonard, Mike Tyson, Roy Jones Jr, and Floyd Mayweather Jr. are just some of the examples. Speed and timing are the perfect counter to power. So what can we do to build speed? Let’s find out.
Before we get started though, why don’t you try taping off different parts of the bag to correlate with different parts of your opponent’s body? This will help you improve not only speed but accuracy.

An easy way to warm up is to have someone hold the bag for you while you fire off 15-20 punches non-stop. Take a moment to rest (reset) and then repeat, aiming for a different part of the bag (body) in the next round. Focus on volume and proper technique here, not power. Do your best Nick Diaz impersonation.

If don’t have a partner to work with, try circling around the bag while peppering it with straight one-two combos (jab plus cross), or hitting it with double and triple jabs. Don’t stand still, keep moving and keep punching.
Some good combinations include:

If you’re training mixed martial arts, we recommend adding low-kicks to your speed exercise routine. Do multiple sets of 15-20 low kicks with a focus on speed versus power.

We cannot stress this enough, but please keep in mind that the focus here is speed, not power. Don’t put everything you’ve got into your heavy bag combos, or you’ll wear yourself out before you ever really get started. It is imperative that you give yourself enough time to reset. A reset is, simply, a very brief period of rest in between combinations to get yourself back into fighting position.

While it is true that raw, one-punch knockout power can’t be taught, it is patently false that you can’t increase punching power. Proper technique beats raw power any day of the week. While no amount of training will ever turn you into Shane Carwin, proper strength training could help you become the next Alistair Overeem

Begin this exercise by hitting the heavy bag with power punches (hooks and uppercuts), and make sure you are hitting the bag hard enough to make it move. Never hit with reckless abandon, however, as this would leave you wide open to getting hit with counter shots in real life.
We recommend the Tabata approach for this exercise. Tabata training is a high-intensity interval training workout that features a hard work out for 20 seconds, followed by 10 seconds rest, repeated 8 times, for a total of 4 minutes.

If you want to improve your footwork in addition to building strength, circle with the bag as it moves, and make sure you are using jabs to set up your power punches. Don’t start heavy bag combos with an uppercut or hook, though. Leading with power punches will get you killed in the ring because they’re not as quick as a jab, and leave you open to getting countered easily.
Imagine your looping hook versus your opponent’s straight right. Which punch do you think is going to land first? Get him on his back foot and into a defensive posture with your jab, and you’ve got a better chance of landing those power punches.

If you’re training MMA, we recommend mixing low kicks and elbow strikes into your heavy bag combos, but again, don’t start your combinations with them.
Elbows require close quarter combat and are most effective against fighters who are hurt and moving forward to initiate a clinch. Trying to begin a combination with an elbow strike, however, means you have to chase your opponent down and close the distance to land it. If you’re lucky he’ll just jab you to death on your way in. If not, you may find yourself on the canvas as he lands an uppercut straight up the middle.

That said, we don’t want to discourage you from throwing elbows. A front (or forward) elbow strike is a great way to finish a combination.

If you are throwing your punches well and moving the bag, gravity will force it to come swinging back in your direction. When it does, try throwing a nice front elbow to finish off the combination. To do this all you need to do is swing your hips just as you would to throw a hook, but bring your fist in towards your chest and strike with the elbow.

If you want to throw a low kick, make sure you hit the bag (or your opponent) with your shin and not your foot. Your foot has 26 delicate bones that can easily be broken by the impact of a hard kick. Your shin, on the other hand, is the second largest bone in your body, and can easily withstand the impact of such a hard kick.

If you taped your bag as we recommended earlier, you should now focus your kicks on the part of the bag about where you would expect your opponent’s lower leg to be. (In real life combat situations you should ideally be kicking an opponent somewhere soft like his inner thigh or calf muscle.)

As with elbows, you may remember our cautionary advice to avoid starting a combination with leg kicks. The reason why is that straight leg kicks will most likely either be checked or caught. Even when they do land you will be left wide open for a counter punch over the top.

Additionally, straight leg kicks will too often result in you getting taken down before you can get back into your basic fighting stance. That is why your best bet is to finish a combination with leg kicks, instead of starting with them. An opponent who is blocking punches is less likely to check kicks or take you down.

Using the bag to build stamina

Speed and stamina do nothing if you don’t have the endurance to keep it up. Learn how to go the distance to maximize your fighting potential.
Begin by working the heavy bag with combinations, leading with the jab and finishing yours with power punches. Some examples include:

Because we are building stamina, you want to move with the bag as you are landing your shots. Make sure you are circling left, circling right, only pausing at brief intervals between combinations to reset. Remember to mix in a front elbow strike if the bag (or opponent) is moving towards you.

Another excellent way to build stamina (and punching power) is to work with really heavy bags (100 – 120lbs). Undefeated heavyweight champ Rocky Marciano, famed for his punching power and ungodly stamina, used to work out on three heavy bags tied together!

Let’s look at a few final do’s and don’ts before you go.

Keep things exciting and don’t fall into a routine. Have fun, be creative, and mix things up to keep your exercises fresh and engaging.

You’ve got the heart, the discipline, and the work ethic. And now we’ve given you the proper heavy bag combo techniques, so there’s only one thing left to do. You know what is – let’s get it on!

5 Boxing Combinations That Will Improve Your Game