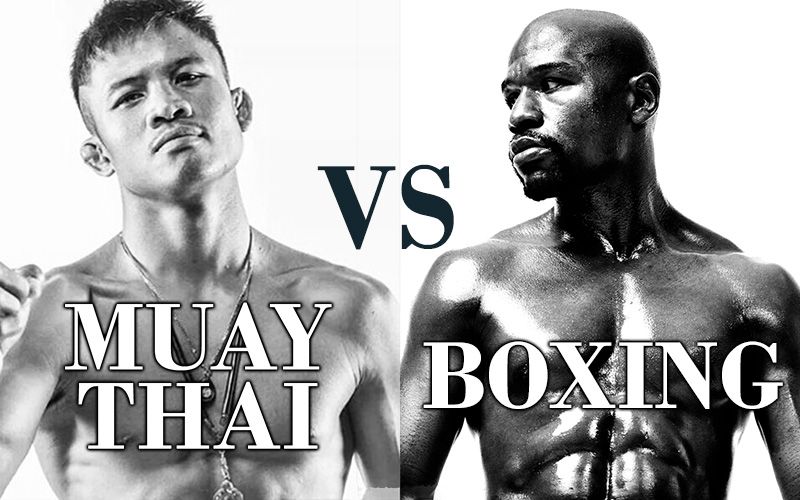 When comparing Muay Thai to Boxing, although both contain an element of punching, the similarities pretty much stop there.  Here’s everything you need to know about the two sports. 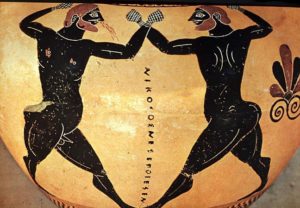 The history of boxing is as old as the history of man itself.  Ever since the dawn of time man has had to fight one another for survival, often favoring hand strikes.  So when boxing actually became enjoyed as a sport is unclear.

The Ancient Greeks may well have been the first people to establish rules and use boxing as a form of entertainment, introducing the sport into the 23rd Olympiad in 688 B.C.

Since that time, boxing has both evolved and devolved (Roman boxers would fight to the death), but always remained popular all over the world. 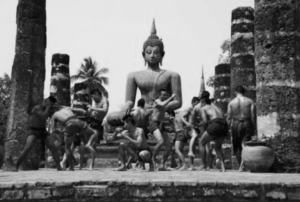 Muay Thai on the other hand is a martial art that was forged on the battlefield.  Invented by the Siam people of what is modern day Thailand, its principles were taught to the Siamese army to be used in warfare.

The effectiveness of Muay Thai was first noticed by the King of Burma in the 16th century who reportedly said “Every part of the Siamese fighter is blessed with venom. Even with his bare hands, he can fell nine or ten opponents.”

After that Muay Thai surged in popularity locally but did not yet spread to other parts of the world. As such, it is a sport that is drenched with Thai culture. It had no outside influence until very recently when it became known worldwide, and foreign fighters began competing.

Now that we understand how these two combats sports developed, let’s start to break down how exactly they differ. 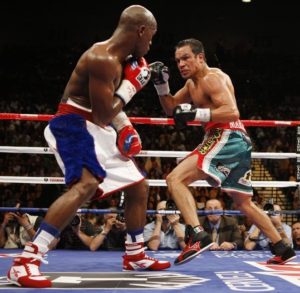 The boxing stance tends to position the fighter’s body more sideways to his opponent.  This helps to minimize the target area and helps defensively.

This couldn’t be done in Muay Thai because it would leave the front leg exposed to kicks.

Take a look at one of the best defensive boxers of all-time, Floyd Mayweather. Once he tucks his head down behind his guard, you can see that there’s very little space to land significant strikes.  There’s a reason why this guy had such a long career – nobody could touch him! 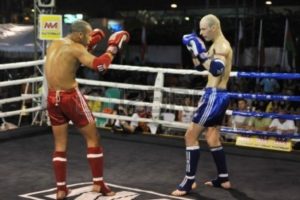 The Muay Thai stance is much more open.  Generally, both hips are squared up to the opponent. This is to allow the fighter to strike with both legs.

The Muay Thai stance is also much more narrow than a boxing stance.  This is to allow the fighter to quickly shift weight between legs for both offensive and defensive purposes.

Muay Thai vs Boxing – The Guard 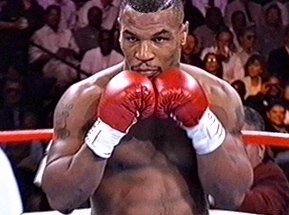 Boxing – Boxers tend to favor a very tight and low guard, keeping their arms close to the body.  Because boxing only allows punching above the belt, they don’t have to worry about the variety of blows that could occur during a Muay Thai fight.

Muay Thai – The Muay Thai guard is held much higher and extended.  This is to protect against potentially fight-ending head kicks but also allows the fighter to quickly throw elbows.

The extension of the hands also keeps the kicks away from the head.  If you block a head kick with a traditional boxer’s guard, significant damage can still be inflicted as the force transfers through your glove onto your head. 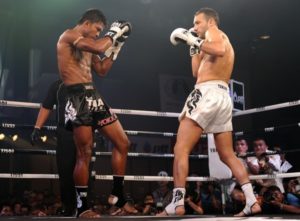 Although it seems like the body is left unprotected, the shins are brought up to check knees and body kicks. Body punches in Muay Thai are very rare as dropping the hands would leave the fighter’s head too vulnerable to head kicks.

Boxing – The boxing rules of striking are pretty straightforward: Only punches above the belt are allowed.  Also, deliberate punches to the kidneys and the back of the head are illegal in all the major federations.

Muay Thai – Muay Thai is known as the “art of 8 limbs” as it utilizes fists, legs, knees, and elbows for striking.  This gives Muay Thai fighters a much wider range of attacks than boxing.  Also by using the unpadded elbow, knee, and shin the sport becomes much more brutal.

Muay Thai vs Boxing – The Clinch 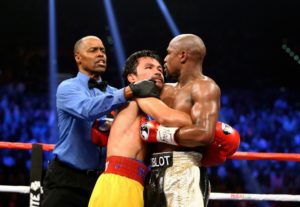 Boxing – The clinch is immediately broken up by the referee in a boxing match.  Often times this is used as a defensive tactic when a superior opponent gets too close, leading to boring matches with little action.

Muay Thai – the clinch is an integral part of Muay Thai.  It is used to control an opponent and set up all kinds of close range attacks.

Check out this video of Muay Thai legend Dieselnoi completely rag dolling his opponents to death with the clinch.

Notice how Dieselnoi uses first his height to weight down on top of his opponent’s head to control them and then his limb length to land crushing knees to both the body and head.  For this reason, tall and lean fighters are preferred in Muay Thai, whereas world-class boxers come in all shapes and sizes. 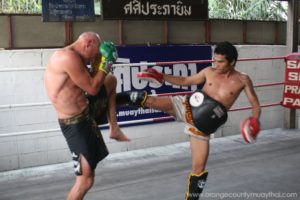 Boxing – Although boxing focuses solely on the hands, any purist will tell you a boxing match is won with footwork.  And good footwork can be seen from every great fighter even in the heavyweight division.

A great importance is placed on footwork and it’s often trained as extensively as punching technique.

Also, you often see fighters ducking down to avoid punches which are almost never done in Muay Thai where fighters remain tall and upright throughout the fight.  Boxers, especially the ones wishing to have long careers, place great importance on ducking, dodging, and slipping punches, an art that is not prominent in Muay Thai.

Muay Thai – Thai fighters place less importance on footwork. They creep forward on their front leg, as do boxers, but can never place too much weight on this leg because they have to be ready to check a kick or deliver one of their own.

You will often see a Muay Thai fighter bouncing their front knee up and down in anticipation of this. Because they spend so much time on one leg they move less around the ring and footwork is less important.

Muay Thai offers little in the way of defensive movement.  Thai fighters focus mainly on offense and prefer blocking or simply absorbing strikes rather than avoiding them. 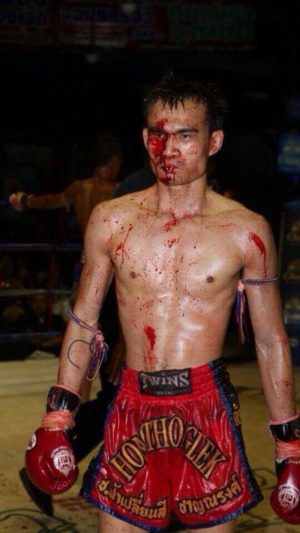 Boxing – Most boxing matches are 12 or 15, 3-minute rounds.  While there’s definitely some pacing involved to be able to last that long, early knockouts are also quite common, unlike Muay Thai.

Boxers will also use longer combinations when they can and absolutely unload if they sense a finish is near.

On the other hand, during a defensive chess match, both fighters could leave the ring without hardly a mark on them.

Both are rarely seen in traditional Muay Thai fights.

Muay Thai – fights are 5, 3-minute rounds. However, in the traditional style of fighting the “real” fight doesn’t start until the third round.  The first two rounds generally consist of very cautious fighting with neither fighter taking or inflicting any real damage.  Early KO’s are unheard of.

This is done in large part for gambling, as most spectators will wait until the 3rd round to get a better idea of the fighters before placing the bets.

Even after the 3rd round as the pace quickens, usually, only quick bursts of 2 or 3 strikes occur before the fighter falls back into his defensive position.

Because of the myriad of striking options, fighters don’t like to risk leaving themselves open very long for counter attacks.

But even with the slow start, with the vicious potential of elbows and knees, it’s not often that you see a Muay Thai fighter leave the ring without taking significant damage.

Boxing – Due to the strict limitation of strikes, Muay Thai hasn’t influenced the sport of boxing.  A Muay Thai style probably wouldn’t fare very well against an experienced boxer in a boxing match.

However, going the other way is a different story.

Muay Thai – Muay Thai traditionally doesn’t place much emphasis on punching and Thai fighters rely more on other forms of striking to do their damage.

But more recently, with the international popularity that Muay Thai has achieved, more foreign fighters with backgrounds in other combat sports have started to compete.

With the influx of foreign fighters came different styles.  Fighters from boxing and even kickboxing backgrounds brought with them superior boxing skills and a greater stress on defensive movement.

No longer were the first two rounds used for feeling out the opponent.  Many foreign fighters wanted to end the fight as quickly as possible and jumped on their opponent from the opening bell.

Modern Thai fighters especially those who compete internationally, have adopted these changes and you’re now starting to see some impressive boxing skills within Muay Thai.

There’s no question that Muay Thai is a more complete form of martial arts than boxing.  And if you’re looking to get into MMA, Muay Thai with its variety of skills, with be of more help.

However, having a strong foundation in boxing will help you in any combat sport.  And boxing has a greater crossover to Muay Thai, where Muay Thai skills will help very little during a boxing match.

One area which there is no dispute is the level of violence in the two sports.  Muay Thai uses some the hardest and most powerful parts of the body unpadded which makes it second to none in terms of raw brutality.  You are literally using your bones to bash your opponents face in.

Then again an uppercut from Iron Mike, gloves or not, is no picnic either.

The Winning Edge of a Prize Fighter Revealed

How To Deal With The Fear Of Fighting